Imperium is an adaptation of Robert Harris’ three books on the life of Cicero, into six plays, each just over one hour long. These have been amalgamated into two plays; Conspirator and Dictator, which are running concurrently with the same cast at the Gielgud Theatre. It is possible, if you choose the correct day, to watch the first play as a matinee and the second one the same evening.

This is a Royal Shakespeare Company production which has transferred from Stratford to the West End. Robert Harris is an acclaimed author of historical novels, renowned for making history accessible. Mike Poulton who adapted these novels has recently brought Hilary Mantel’s,Tudor novels to the stage with great success. These three combine well to make a thoroughly entertaining and interesting biography of one of Rome’s less covered  characters. 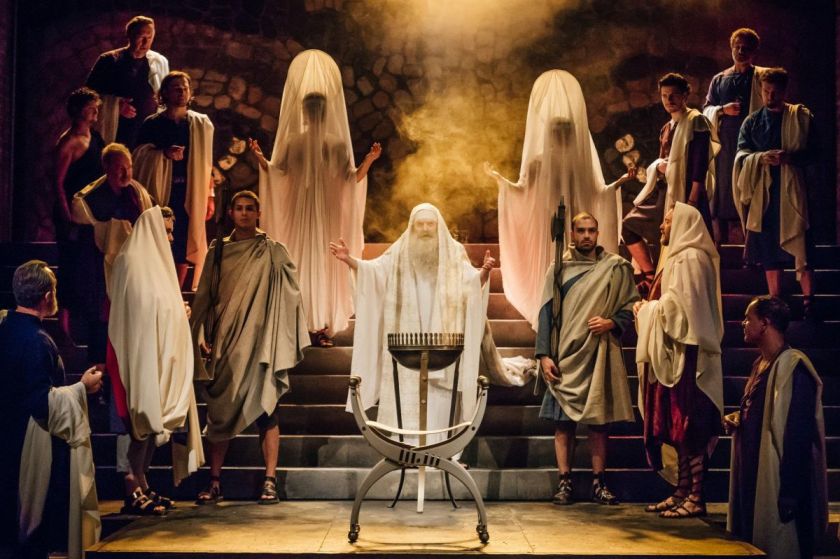 Cicero has been written as the hero here although not without flaws. He is honourable and steadfast to his belief in the Republic of Rome. He has great oratorical skills and is politically adept. He is also vain, aware of his talents, but blind to his faults. Richard McCabe plays the part admirably, with charisma – he is self important and gossipy, but witty and likeable still. The other main part in this play is Tiro, Cicero’s slave, who is writing his biography. Joseph Kloska is fantastic in this role, he is effectively the narrator of the story. He is integral to making Cicero likeable and his affection for his master, while seeing his faults, shines through his performance. Both of them are on stage for almost the entire seven hours of the show. The synergy between these two main characters is lovely and is the column around which the whole production is built.

Nearly everyone else is an antihero and a threat to the Roman Republic. Peter de Jersey is a smooth, smiling Julius Caesar – politically adept, desirous of power for personal gain. Joe Dixon is very good as Cataline, all brawn and little brain, who believes that he deserves to rule Rome and is prepared to bring it down in revenge, if it fails to deliver his wishes. In the second series of plays Oliver Johnstone is good as Octavian Caesar. He is cold, calculating and calm, able to bide his time as he is convinced of his own divinity. 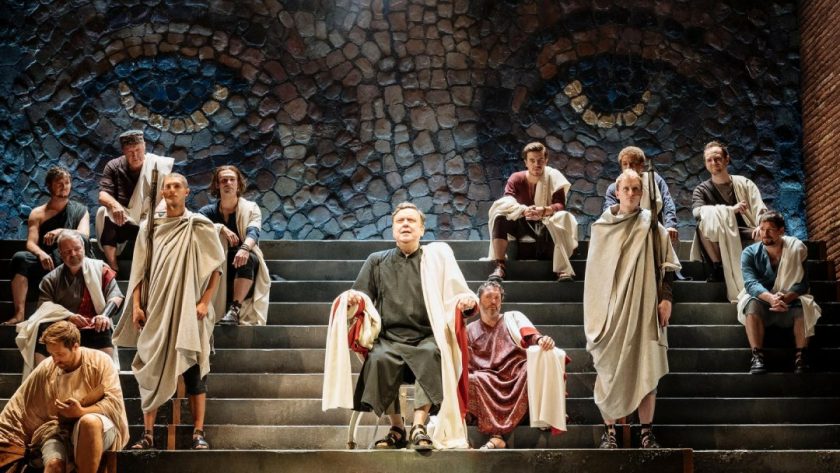 For me, the one misstep was portraying Pompey as a Donald Trump type figure. In historical terms it is likely that they were far from alike politically, and director Gregory Doran did a nice job of drawing our own comparisons with the present day throughout the rest of the show, without us needing any coercion, so maybe we should have been trusted to do the same here. However that is a small quibble, for a production that has managed to walk the line between accuracy and accessibility.

The set too is good, simple and effective. Senate steps that the cast sit upon while listening. Tesserae of watching eyes at the back of the stage. The walls of the senate are built with Roman bricks. There is a huge revolving, reflective, silver globe suspended over the set, that changes hue with events on stage – perhaps a pun on Urbis et Orbis from the city to the world. Anthony Ward has done well making the audience the forum, to whom the senate are speaking and drawing us in to the action.

Imperium is a lovely reproduction of a small part of ancient history. it is witty, funny and accessible, an enjoyable show whether or not you have an interest in the Roman Republic. Robert Harris famously said of his Cicero trilogy that is “The West Wing with Togas”, well this contemporary adaptation turns it into “House of Cards in Ancient Rome”. Surely a Netflix production cannot be far away – and if it is I will surely be watching!