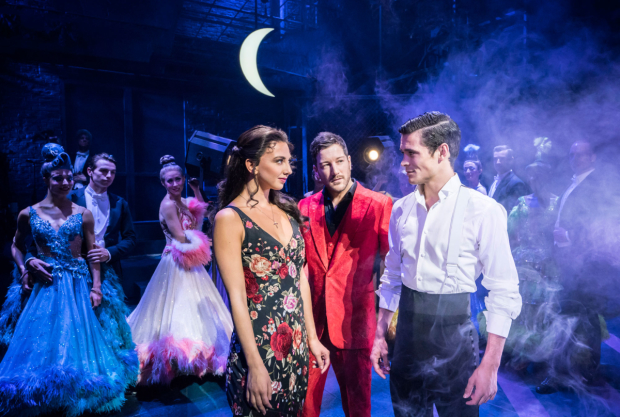 Strictly Ballroom is a crowd pleasing juke box musical. It certainly has a lot of good things going for it. The film, on which is based, is a classic Australian indie comedy of the early ’90s and it is wonderfully odd and funny. The songs are popular upbeat singalong tunes that the audience will know and love. The cast is great and the director and choreographer have some great musicals on their CV.

The show has been rewritten for the stage and a new character, a narrator, has been added. The idea is brilliant, he sings the songs, adds perspective to the larger than life characters and propels the action along with some knowing repartee. Matt Cardle plays this part, Wally Strand, and he does a good job. He has a great voice and he is nicely self deprecating. However there are 35 different songs in this 2 hour show, many of them delivered in two, three or more pieces. He rarely get to sing more than one bar without stopping. It would have been lovely to listen to a complete song in one go, instead of hearing them broken up into fragments.

The story has not been changed from the film and is simple but solid. The difference is that, in the film it was mostly played straight and the characters were unintentionally amusing. Here we have cartoon-like caricatures played for laughs and the comedy feels strained at times. There are funny lines and the caricatures are comical. The acting is  good, Matthew Stevens and Anna Francolini’s over the top performances as Doug and Shirley Hastings were both enjoyable.

Jonny Labey and Zizi Strallen are both good dancers and excellent as Scott and Fran. The ensemble look good, but the stage at the Piccadilly is too small fit the entire company  and the group set pieces feel cramped and uncomfortable.

The set is sparse and effective, it needs to be because of the lack of space. The costumes are wonderfully sparkly and camp. “Strictly Ballroom, the Musical” has been damned with faint praise, the show is fun and the audience gave it a warm reception. It is a good show, but the sum does not quite live up to all its parts. I liked it but the expectations are high and, in London’s West End, the competition is fierce.