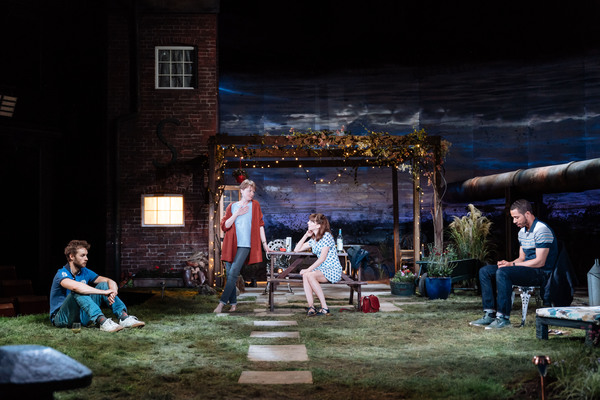 Nightfall is a play by Barney Norris, who has already written many plays and books, winning the Critic’s Circle Award for most promising playwright along the way. From this production, you can see that he has a talent for writing dialogue. It has a realistic feel and there are some lovely moments of insight. However, this is a four hander and all of the characters don’t feel fully developed. The two women in particular are caricatures who, despite the difficulties they battle through, one does not feel much empathy for. The storyline has many twists, some very dramatic, but I felt that we were told about them, then they were forgotten about and had little effect on the characters’ actions.

Having said that, there are positives, the set is amazing and uses the modern stage to its best effect. The Bridge Theatre is a new theatre, less than a year old, and it is beautiful. Bigger than I expected, although it holds almost 1000 people, the design is such that I cannot imaging that there is single restricted view seat in the whole auditorium. The stage area itself is very versatile, it would not have been possible to have a set of this design in a more traditional theatre. I loved the lighting too, it is set outdoors and sunsets and sunrises are done beautifully. Cars arriving and leaving at night were also lit very cleverly.

Ukweli Roach puts in a great performance as Pete. Sion Daniel Young is also good as Ryan and there was an undercurrent of chemistry between the two characters that felt undeveloped. It is interesting to see that one of Barney Norris’ non fiction books is about the theatre of Peter Gill, because there were times when I was reminded of The York Realist.

Overall, although I enjoyed listening to them talk for the two hours, I did not feel that there was any narrative arc or that any of the characters had moved on over the course of the play. Perhaps  the type of nostalgia he was trying to evoke would have been easier to attain if it had not been set in the present, or perhaps it is one of those plays whose real depth will not be apparent until some years after writing.