LIFT 2018 is a festival of international performance, running at various venues around London from late May until early July. There is a wide choice of shows available and a huge variety of styles on show. There is a children’s show by renowned theatrical company Punchdrunk, where adults will not be granted admittance unless accompanied by a child. There is a South Korean Opera about the Trojan wars in Greece and there is even a piece of performance art that involves 1500 pigeons, with LED lit leg-rings, flying above the Thames.

Phobiarama is billed as an immersive theatre experience. This is certainly true, and I don’t wish to give too much away, as being unaware of what is about to happen adds to the thrill of the show. I would best describe it as a 21st century ghost ride with real actors, strobe lights and political overtones. Dries Verhoeven is a visual artist who has updated a 20th Century fairground ride into a paranoid, threatening 21st Century journey through political and popular culture. This show travels the world but each one is site specific, and this one has elements that apply particularly to London. I can say that it gives a feeling of drifting through a waking nightmare and I was reminded of film warnings that say “This show contains some scenes of mild horror”.

You are disorientated from entering the space in pitch blackness and the anxiety gradually racks up throughout the 45 minute performance, as shadows in the background slowly become more real, with television newsreels reminding you of events that have happened in London over the past years. I guess that some people do not like to feel frightened, however lightly, so this show will not be for everyone, but I enjoyed the feelings of mild paranoia that I was given and I found it interesting to think about why some of the scenes made me feel uncomfortable. 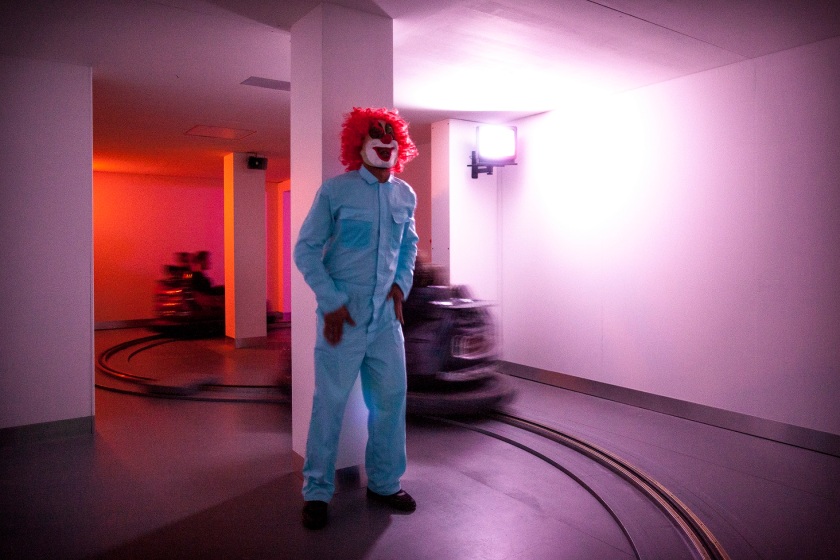 The opportunity to experience running away backwards from an evil clown, while Nigel Farage rants on about the iniquity of our immigration system, is one that does not occur regularly – and although this was a memorable part of the show, it was by no means the most disquieting, so if you think that this is something you might enjoy, you need to take the chance now, while it is here.

I would suggest that you should not go if you find strobe lighting a risk or if you suffer from coulrophobia. I have to say that I thought that this was a really interesting experience.  I hope that Dries Verhoeven brings other events to London and if he does, I fully intend to visit them.