Summer and Smoke had a successful run at the Almeida theatre earlier in the year. The reviews at the time were ecstatic but tickets were impossible to get, so it was great news to hear that it had been given a West End transfer. When it was first produced, in 1948, it was the follow up to “A Streetcar Named Desire” but it did not match that play’s success.  There have been revivals in the intervening years, but the only successful one has been the off Broadway version, with Geraldine Page as Alma, that was eventually made into the film with Laurence Harvey as John. Geraldine Page received an Oscar nomination for that part.

The set is a bare brick wall with seven pianos set in a semi circle facing it. These are played at the start, finish and at dramatic moments through the play. The rest of the stage is basically empty, save a few chairs brought on and removed as they are needed. The setting is the American deep south in the early 20th Century, classic Tennessee Williams territory. The story is too, a tale of unrequited love struggling against unbridled lust, in a small American town in the sweltering heat of summer’s sultry climate.

Director, Rebecca Frecknall, has taken the decision to make this production revolve totally around Alma Winemiller. She is almost always on stage and on the rare occasions when she is not central, we are thinking about how the action taking place will affect her state of mind. This is a bold directing decision, but perfectly vindicated by Patsy Ferran’s performance as Alma. She is phenomenal, it is a career defining role and she drags us through every high and low. One of the toughest things for an actor to do is bring the audience with them when they have a life changing epiphany which totally reverses their world view, Patsy Ferran does this remarkably well, and if she does not win awards for her acting in this play, then I cannot wait to see the performance that beats it.

The rest of the cast are excellent too and provide wonderful support. There are a couple of moments where music is used to heighten the drama. Both of these are chillingly good. Anjana Vasan has a beautiful blues voice, when she sings in the casino. The slow motion sequence during the shooting, which I think used a Portishead track, has an ethereal, poetic quality that raises the production to a more abstract, surreal vision than we are used to seeing in a Tennessee Williams play, and this worked very well.

I enjoyed this production, it was brave enough to approach Tennessee Williams in a more lyrical manner than usual, the added musical dimension, although lightly used was very effective and it will endure in the memory for the amazing performance of Patsy Ferran in the leading role.

Cole Porter’s 1948 musical, Kiss Me Kate is a complex show, some of its numbers are  classic Broadway showtunes, while others have a light opera edge. It has complicated, full company dance routines as well as individual virtuoso displays. It also has a couple of good comedy roles that require great timing and delivery. On top of this, the Coliseum itself, has a big stage that needs a large company to fill. All in all, this is a show, in a venue, which will test every part of the company putting it on, to the fullest degree. I have to say that Opera North have passed this test with honours.

The two operatic leads, Quirijn de Lang and Stephanie Corley, as Fred/Petruchio and Lilli/Kate both have splendid voices, suited to their roles.  Zoe Rainey and Alan Burkitt, as Lois and Billy, carry the more standard musical numbers perfectly. Each of the four of them has at least one great song to show of their respective talent. Lois has possibly the most famous songs in “Always true to you in my fashion” and “Tom, Dick or Harry” but Kate’s “I hate men” and Petruchio’s “Where is the life that I led” are really great songs that show of their vocal abilities. The show’s biggest song, of course, “Too Darn Hot” is sung by the chorus, and the dancers, particularly Aiesha Pease and Stephane Anelli, deliver a truly show stopping performance to this number. 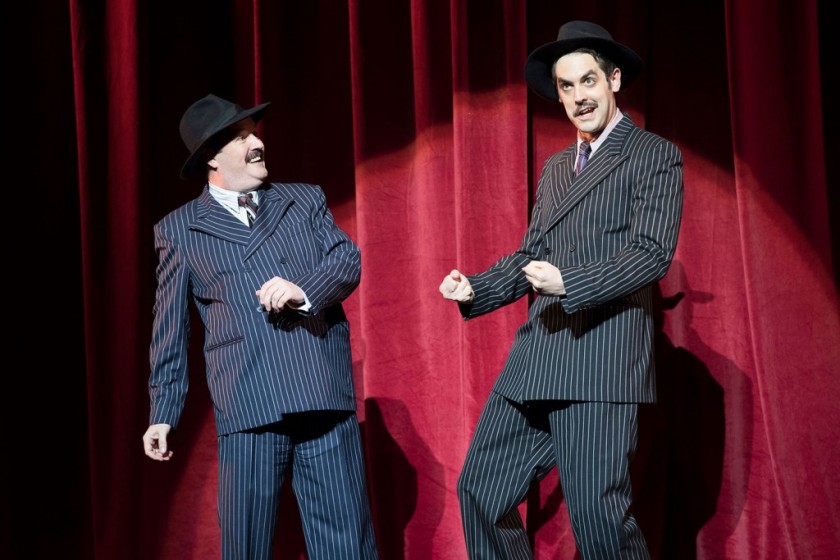 Joseph Shovelton and John Savournin play the comedy roles of first and second Gunman. They work very well together, their interaction is excellent and they make the most of their comedy duet “Brush up your Shakespeare” – a song more full of puns than I had previously realised. The company as a whole is excellent and you realise that this is going to be a show full of movement and vigour, right from the first song of “Another Op’nin’, Another Show”.

Kiss Me Kate is a big show, and this is a big full-on production of it. The costumes are bright and lavish.  The choreographer has a tough job, with so many people on stage at once, however the dance routines are vivacious and have lovely shape. The set design needs ingenuity too, and is very clever at swapping from front of stage to back of house in seconds.

The director, Jo Davies, has taken the bold decision not to update the show in any obvious way. At times, it felt like you were actually watching a show made in the 1940s, giving the show an interesting post-war period feel. The tap routine, in particular, had a dated, black and white movie quality, which suited the production very nicely. This is a lush and exuberant production of a distinguished show and it fully deserved the love it received from the packed audience at curtain down.

This is a bar hidden beneath Piccadilly Circus. It is through a quite unassuming entrance in Sherwood Street. There is a café with some tables outside called Zedel, if you go through this café, down two flights of stairs, you will come to a surprising bright French looking foyer with a cloakroom,  a French restaurant called Brasserie Zedel and Bar Americain.
It is a beautiful, low lit, late art deco decorated room. It has lots of dark wood, the marquetry columns are particularly attractive. It has light jazz playing in the background, just audible but not intrusive. The atmosphere is that of a set of a 1940s film noir. The waiters are in suits or formal white jackets.

The cocktails are very good, the list is classic. The martini was perfect and the whiskey sour was both tart and had a nice kick. They have a good wine list and also a nice selection served by the glass. The tariffs aren’t low, but the price is around what you would expect for somewhere this attractive so central and it is good value for the experience that you receive.
Its the perfect place to meet if you are eating in Brasserie Zedel as the waiters will come to fetch you and carry your drinks when your table is ready. It is also very handy to meet if you are attending the theatre in Shaftsbury Avenue or Haymarket as it within a three minute walk from either. 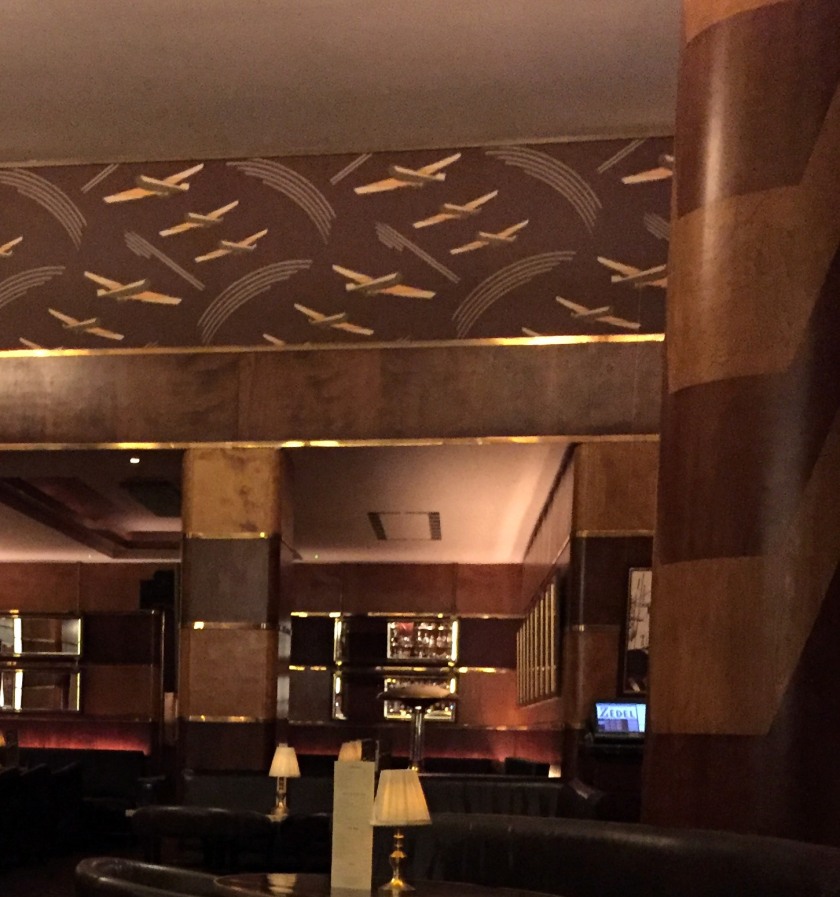 A beautiful quiet cocktail bar in a very central position, a lovely place to meet for a quiet catch up or for a quick drink before or after an evening out.

Georgia O’Keeffe at the Tate Modern is a very big exhibition. There are thirteen room filled with paintings from every period of her career and there are also some works by her friends and collaborators. It was a nice, unexpected bonus to see some Americana by Ansell Adams included in the show.
It is arranged mostly chronologically and with so many pieces on show, you can watch her style developing through the decades. The earliest pieces are from the 1910s and you can see a hint of the time in them. The 1920s pictures and the New York ones have the slightest art deco feel and her ability with colour is profound even from the earliest days.
The 1920s,1930s flower pictures are probably her most famous and they look so modern, vibrant and current even now that it is difficult to imagine how new they must have seemed 80 odd years ago.
Georgia O’Keeffe’s move to New Mexico brought another complete change of style. the only common factor being the inspired use of colour throughout. There are also series from the 1940s and 1950s where some are more minimalist in nature and others are figurative.
The latest pictures date from the 1960s and you can also see the times reflected here.
Initially, I thought that the entrance fee, around £16, was pretty steep for a single show. However, it is probably one of the largest shows that I have ever seen, you won’t really feel like seeing much else in the Tate Modern on the same day, and the quality of the paintings is such that, on balance, it is good value for money. There is also enough depth to the exhibition that you can really see the arc of her development as you walk round the show and it is very interesting to watch those changes over the course of such a long, talented career.