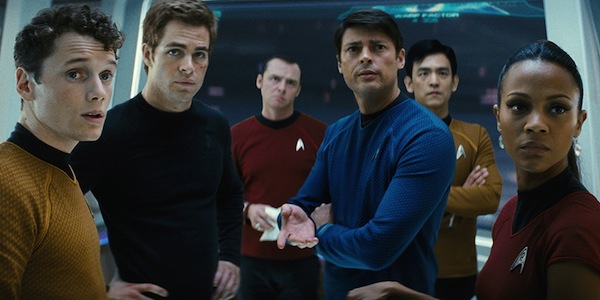 Star Trek Beyond is a mixture of good and not so good.
Let’s get the worst out of the way first – the film is too long for the very flimsy story, 20 minutes could be cut, all of it from the battle near the start of the movie, which was predictable and repetitive. There are huge holes in the plot which are explained away by ridiculous technical gobbledygook, although some of this is done in a knowing, tongue-in-cheek way which at least makes it funny.
Humour is one of the good points of the film, it doesn’t take itself too seriously and it is the funniest of the franchise so far. The script is excellent, there are some really good lines and the resolution of the film is both clever and witty. The special effects and the acting are good. I really liked Sofia Boutella’s character.
We are now on the third film into the reboot series and we already know all the main crew members. This film develops and handles the relationships between these characters very well, and we really do care about them by the end of this movie. It is genuinely sad to think that Anton Yeltsin won’t be there if there is another in the franchise.
Even though this is not one of the best Star Trek films in terms of plot or storyline; it is one of the best for humour and character development, and I will certainly be coming back to see what happens to them in the next instalment.